Firstly, one needs to decide on which predictors to include and motivate why they should be included. This should be motivated theoretically based on what is known through earlier research in the field.

1.1. Predictors chosen for the logistic regression

As in my case, after discussing with SS I decided to add ‘Earlier experience of being actively involved in research’ as an additional predictor to the list of already decided-upon predictors. Thus, the list of predictors (independant variables) for willingness to be actively involved in research decided-upon that I would like to include in the model are (with the variable names in SPSS in parenthesis):

For the lastly listed independant variable, I realised that I needed to create a new variable which goes something like this:

Thus, for this created a new variable called ActivelyInvolved (through Transform -> Compute variable as described here as ‘Method 2’). And it worked out just fine!

Unfortunately, I found no way to in an automatic way enter a ‘2’ for the rest of the answrs so I had to put it in manually.

2. Make sure assumptions are met

Secondly, the assumptions must be met in order for the results to be valid. Assumptions here relate to three aspects: a) Sample size; b) Multicollinearity; c) Outliers.

Here a potential issue concerns the number of cases in the sample and the number of predictors (independant variables) one wishes to include in the logistic regression model.

In the book it is recommended to run Descriptive Statistics on each of the predictors, and to consider collapsing or deleting categories if they have limited numbers.

My question here is: How do you know if the numbers are limited, and what is considered limited. Is there a form of measure for this?

Update: Aftor doing a bit of reading, I found the following formula on page 155 in Pallants book:

I decided then to run Descriptive Statistics in SPSS on each of the chosen variables and the result is presented here:

Birthplace has only 78 responses in the ‘No’ category, which is judging by the formula for multiple regression too small a number. The question is if this requirement need to be fulfilled also when running logistic regression. Is it better then to create two different models then rather than one big? In order for an N = 78 to be acceptable in a model it can at most contain m independant variables, where:

Meaning, it could at most contain three independent variables.

Before performing a correlation analysis, it is a good idea to generate a scatterplot. This enables you to check for outliers and for violation of the assumptions of linearity. […] Inspection of the scaterplots also gives you a better idea of the nature of the relationship between your variables.

The question is, which variables should I check for correlation between? Can I do it for all eight independent variables as once? As I read further in the book, this is possible following the method described on page 143. However, intertwining too many variables like that is not without cautions, and it is good to have a strategy or plan for what one is doing and why. I also found a good article on Medium on the topic. However, following the instructions given in the chapter in Pallant’s book devoted specifically to logistic regression, she writes (on page 176):

…you should always check for high intercorrelation among your predictor (independent) variables. Ideally, your predictor variables will be strongly related to your dependent variable but not strongly related to each other. Unfortunately, there is no formal way in the logistic regression procedure of IBM SPSS Statistics to test for multicollinearity, but you can use the procedure described in Chapter 13 to request collinearity diagnostics under the Statistics button. Ignore the rest of the output, but focus on the Coefficients table and the columns labelled Collinearity Statistics. Toleranc values that are very low (less than .1) indicate that the variable has high correlations with other variables in the model. You may need to reconsider the set of variables that you wish to include in the model and remove one of the highly intercorrelating variables.

I followed the instructions on page 169 and this was the Coefficients table I got:

It is important to check for presence of outliers or cases that are not well explained by your model. In logistic regression terms, a case may be strongly predicted by your model to be one category but in reality be classfied in the other category. These outlying cases can be identified by inspecting the residuals, a particularly important step if you have problems with the goodness of fit of your model.

Here is the Residuals table I got when I follwed to instructions on page 169: 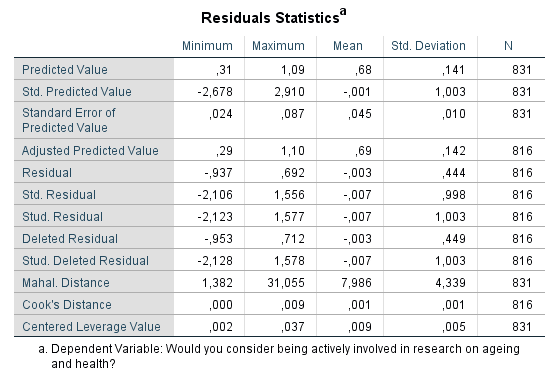 Here, I need to make the dependent variable dichotomous, and not only that, I should also according to Pallant (p. 177)…

…code the responses as O and 1 […] The value of 0 should be assigned to whichever response indicate a lack or absence of the characteristic of interest.

In order to code it properly for the logistic regression I recoded it in the following way and I named the new variable *Q7_recode_for_LR_*: